"Magnificent...Angels and Aliens, no matter what your beliefs...the most fascinating book written on the subject."—San Francisco Chronicle

"Probably the most profound book on the UFO controversy yet to appear... Thompson chronicles the unfolding UFO story, from flying saucer sightings in 1947 to the millennial mythologizing they've stimulated since... Prepare to imagine the unimaginable."

A breakthrough... [A] lucid, intuitive, erudite understanding of the UFO as it presents itself in that realm between mind and matter... Thompson is a beautifully skilled writer, using words precisely and expressively."

"Angels sand Aliens is a scholarly work. Those interested in myths, visions, angels and shamans will enjoy Thompson's research. He has amassed a great deal of proof to support his claim that people need myths as part of our cultural heritage."

"By bringing different views of the UFO puzzle into a single purview, Keith Thompson opens up the field. The book is balanced, thoroughly researched, and highly imaginative. It will, I believe, prove to be another turning point in the history of UFO studies."

The Future of the Body

"Thompson thinks that neither the UFO debunkers nor the UFO bunks are asking the right questions. As a result, the phenomenon remains suspended in a sort of scientific and theological limbo."

Deighted to report that plans are underway to bring out a 30th Anniversary Edition of Angels and Aliens: UFOs and the Mythic Imagination. Details to come. 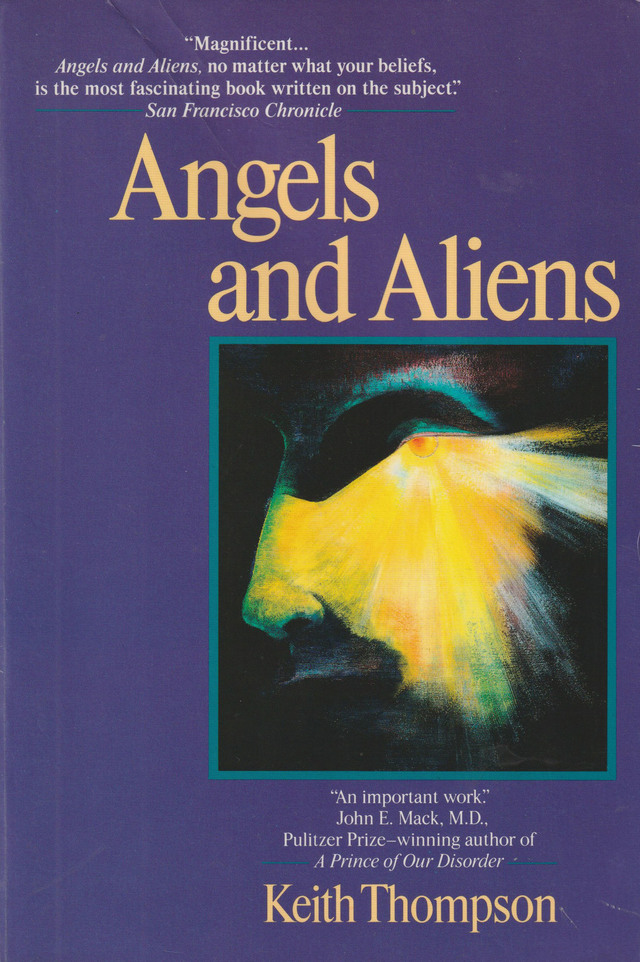 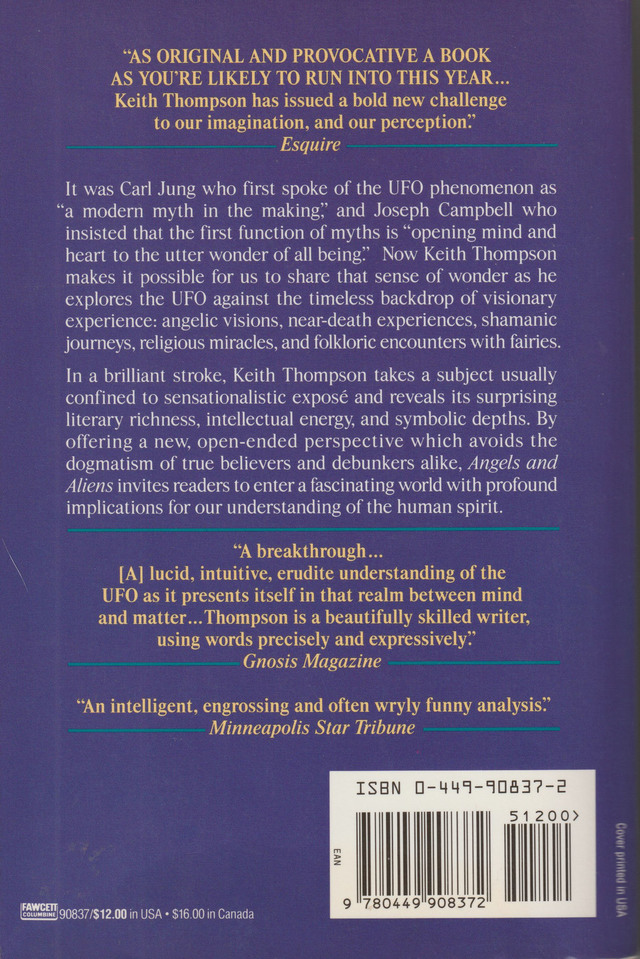 "In a brilliant stroke, Keith Thompson takes a subject usually confined to check-out counter tabloids and reveals its susrprising literary richness, intellectual energy, and symbolic depths. By offering a new, open-ended perspective which avoids the dogmatisim of true believers and debunkers alike, Angels and Aliens invites readers to enter a fascinating world with profound implications for our understanding of the human spirit.

"It was Carl Jung who first spoke of the UFO as a 'modern myth in the making,' and Jospeh Campbell who insisted that the first function of myth is 'opening mind and heart to the wonder of all being.' Now Keith Thompson makes it possible for us to share that sense of wonder as he exploes the UFO against the timeless backdrop of visionary experience: shamanic journeys, religious miracles, and folkloric encounters with fairies and dwarfs.

"Angels and Aliens offers a compelling intepretive history of the UFO phenomenon, beginning in 1947 when the first reports came in describing nine disc-shaped objects moving in the sky "like a saucer skipping over water." In Thompson's even-handed telling it is difficut to decide which is more outrageous: the storiess of temptresses from outer space disembarking for impregnation by sexually-confidant farmers, or the government's ham-handed explanation for ambiguous events that nonetheless did take place, having been confirmed b by both radar and independent visual sightings.

"Thompson argues that the need for clear distinctions in the Westrn mind obscures the rich sense in which the UFO phenomenon becomes not less real but more so for its mythic, metaphoric, allegorical dimension. No matter whether the reported sightngs were caused by literal aliens from another galaxy or summoned from some poorly understood dimension of the human psyche, we may come to fathom the distincitively modern longing to recover lost intimacy with deeper currents of the universe.

"Angels and Aliens prepares us for the provocative conclusion that, where mind and matter intersect, what we terms reality may in fact be a limited spectrum with a much larger realm of possibilities." —from the jacket of the 1991 hardcover edition of the book published by Addison-Wesley Publishing

"Just when we thought there was nothing new to be said...here comes Angels and Aliens, as original and provocative a book as you're likely to run into this year. Keith Thompson has issued a bold challenge to our imagination, and our perception."

"I enjoyed the book immensely, and read it through at one sitting. It is a spellbinding tale that deepens our understanding of the UFO phenomenon. The central value of the book for me was its ability to break down the mental categories that the Western mind has developed. It attacks the boundaries between the material and the psychological, the mythic and the real, as well as distinctions betwen symbolic and literal... Thompson's 'cosmic cameleons' prod us to take apart easy ideas about the supposedly interminable gulf between mind and matter, spirit and body, masculine and feminine, nature and culture, and other dichotomies."

A Prince of Our Disorder

"One need not have reached a final opinion about reports of UFOs to appreciate Keith Thompson's considerable skill in showing how the flying saucer has emerged as a provocative symbol for late twentieth-century hopes and fears."