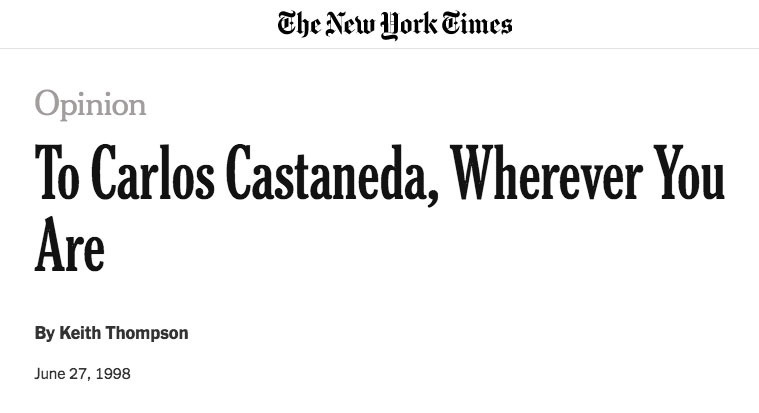 When I heard that the coroner's certificate listed his occupation as Beverly Hills schoolteacher, I was amused. But I wasn't surprised. Why shouldn't rumors about Carlos Castaneda's death be as exaggerated as his life?

Castaneda's death was reported a week ago, two months after it occurred. He is likely to be credited, in his footnote in history, as one of the most notorious, charming and unapologetic tricksters of the century. Which is why I'll never know for sure whether the Carlos I met that day five years ago was him, or rather some Carlos-not.

Castaneda had agreed to sit for an interview for Paris Review. The editor, George Plimpton, said that as far as he knew it would be the legendary anthropologist-sorcerer-author's first on-the-record conversation in two decades.

Mr. Plimpton wanted to know if I was up for a chat with a cultural icon whose obsession with secrecy made Salinger and Pynchon raging extroverts by comparison.

I was 14 when Castaneda stepped from the anonymity of graduate school in 1968 with a book called ''The Teachings of Don Juan: A Yaqui Way of Knowledge,'' the first of a series chronicling his ''apprenticeship'' to a Yaqui Indian sorcerer named Don Juan Matus. The books described sensational encounters with hundred-foot gnats, human heads that turned into crows, cars disappearing in broad daylight, the same leaf falling four times.

When the Establishment slammed Castaneda, it only proved he was cool. Attempts to explain away his adventures as peyote-induced only made the prospect of peyote more tantalizing. ''The Teachings of Don Juan'' gave my generation glimmers of what Sunday-morning-only religion seemed determined to vaccinate against -- the sacred, up close and personal.

The person who introduced himself to me as Carlos Castaneda was contagiously mirthful. His eyes were large and clear. They might have been gray.

Since I was on assignment for a literary magazine, I was eager for Castaneda to talk about his creative process. When, how, where do you write, and why? He politely demurred, saying Don Juan had taught him the importance of ''erasing personal history.''

''The more you are identified with people's ideas of who you are and how you will act,'' he said. ''the greater the constraint upon your freedom.''

(Advice to Bill Clinton: If things get any tougher, try ''sorcerer's privilege.'')

Castaneda spent the remainder of the interview recounting the tales that had made him (in)famous. How he had met the evasive Don Juan in an Arizona bus station. How the old Indian had badgered him to grasp that there is more than one reality, and such a thing as magic that isn't illusion. Nothing new; it was all in his books. Nor was I surprised when a poker-faced Castaneda insisted, as he had for three decades, that Don Juan was no figment of his imagination.

I am an anthropologist, he declared.

I wasn't sure whether to laugh or yawn -- or cheer. Try as I might, I couldn't make my response to Castaneda fit any single box.

On the one hand, the spiritual force of his books doesn't require Don Juan to be other than an allegory. Still, my pre-interview research turned up convincing evidence that Castaneda the graduate student had talked openly and in great detail about his adventures with Don Juan six years before ''The Teachings'' was even published. If he made up Don Juan entirely out of tie-dyed whole cloth, he did so well in advance, when he didn't have an obvious need to. So in terms of credibility, I was willing to cut him some slack.

Then, near the end of the interview, Castaneda let slip that his grizzled mentor was no more. Pressed, he confirmed that Don Juan had chosen to ''displace his assemblage point from its fixation in the conventional human world.'' The master had ''combusted from within.''

I took this to mean the old coot had retired from an exhausted plot line.

Maybe Castaneda's account of Don Juan's demise would meet Kenneth Starr's standard for a leak to Newsweek. But I couldn't blame Mr. Plimpton for declining to publish an interview that shed so little light on Castaneda as a writer.

There ends my story. But not quite.

Castaneda promised that day to send me an autographed copy of his book ''The Art of Dreaming.'' It never came. When I read his obituary, I had to accept that it never would.

But what if I was wrong about that?

After all, Castaneda insisted he was never married, yet court records showed he had been. He claimed at least two different birth dates and locations. He wrote that he had grown a beak, changed into a crow and learned to fly. His death certificate preposterously called him a public school teacher.

Could this most practiced of pretenders have faked his own demise? To even consider the possibility was to imagine a degree of duplicity beyond my comprehension.

Well, almost. Carlos, do you think you could send me that book? 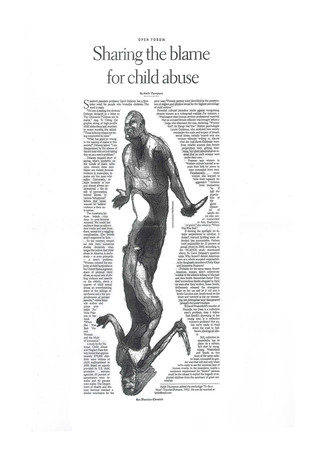 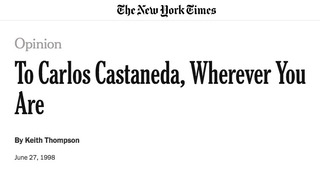